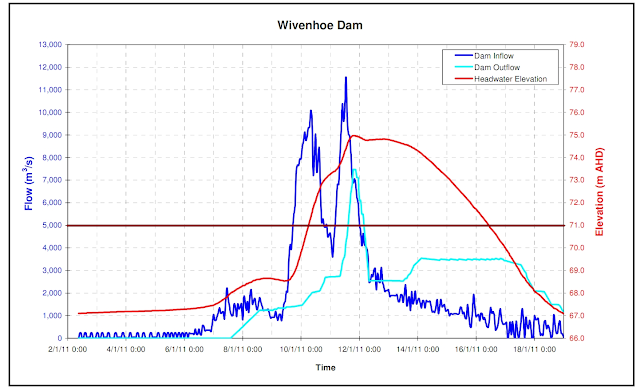 The 2011 flood at Wivenhoe, showing inflows (Dark Blue), releases (Light Blue), Dam Levels (Bright Red) and the approximate level of peak flows for the sub catchment in 1974 (Dark Red).  Figure is from the SEQ Water Report, and modified to show 1974 peak.
The key findings are that this was an unusual event, with an Annual Expected return Probability of (possibly) less than 1 in 200, and for some stations, an AEP of less than 1 in 2000 .  That level of rainfall was not predicted in the Bureau Of Meteorology five and three day forecasts, and so was for practical purposes could not have been predicted.  Although the peak inflows to the dam far exceeded 1974 levels (by 200 and 230%), the rise to the peaks was much sharper than in 1974, so that total inflows to the dam only exceeded 1974 levels by 190%.  Peak inflows reached a level with an AEP of approximately 1 in 900.
Because of the very rapid rise and fall of water levels, along with much smaller rainfalls in other sub catchments, this flood would not have exceeded 1893 levels even without the dams (contrary to my earlier speculation), but it would have significantly exceeded 1974 flood levels. 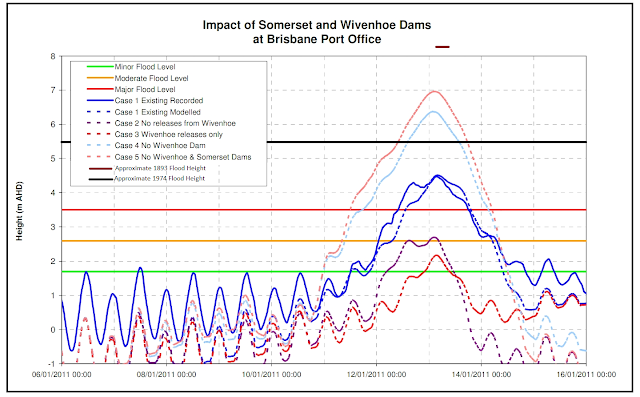 Modelled and observed 2011 flood heights at the Brisbane Port Office, from the SEQ Water Report.  Modified to show approximate heights of the 1893 and 1974 floods.


As indicated, the extreme levels of rainfall were not predicted by the Bureau of Meteorology.  On some forecasts the BOM under predicted rainfall, most especially on the last day of rainfall in which they predicted a further 12 hours of rainfall than actually occurred.  This was a factor in the very large releases on Tuesday, 11th of January.
For those who are interested, here are the key points from the Executive Summary of the report:

"The January 2011 Flood Event can be categorised as a large to rare event by the Institution of Engineers Australia (Engineers Australia) national guidelines for the estimation of design flood characteristics (AR&R).  The flood level classifications adopted by the BoM also define the Event as a major flood.  Relevant statistics that demonstrate this are:

• On the morning of Tuesday 11 January 2011, water levels in Wivenhoe Dam began rising rapidly in response to very heavy localised rainfall on and close to the Wivenhoe Dam lake area.  At the time, the BoM radar indicated this rain was located in an area not containing real time rain gauges.  Post flood analysis suggests the rainfall required to reproduce this rise could exceed an AEP of 1 in 2,000 and may be well into the extreme category.  Rainfall of this intensity and duration over the Wivenhoe Dam lake area at such a critical stage of a flood event was unprecedented.

• The volume of total inflow into Wivenhoe Dam during the Event was 2,650,000ML.  This volume is almost double (190%) the comparable volume of inflow from the January 1974 flood event, and comparable with the flood of 1893.

• The peak water levels recorded at gauges in the Brisbane River catchment above Wivenhoe Dam during the Event exceeded the major flood level and in many cases produced the highest levels ever recorded.  This situation was repeated along in Lockyer Creek that enters the Brisbane River downstream of Wivenhoe Dam.

2.  Two distinct flood peaks entered Wivenhoe Dam during the Event.  The first flood into Wivenhoe Dam was similar in nature and magnitude to the comparable flood flows of the January 1974 event.  The combined mitigation effect of Somerset and Wivenhoe Dams ensured this first flood did not result in urban damage below Moggill, however achieving this result did cause significant filling of the Dams’ flood storage compartments.

4.  The flood compartments of the Dams were filled to a high level by the first flood and there was not sufficient time to release this water prior to the second flood arriving.  Accordingly, the second flood could not be completely contained without risking the safety of the Dams.  The resulting inflow of water into the Brisbane River combined with flood water from Lockyer Creek, the Bremer River and the Lower Brisbane River to cause urban damage.  However, the extent of this damage was greatly reduced by the operation of the Dams.

Rainfall forecasts in the early stages of the Event did not support flood releases being made from Wivenhoe Dam, greater than those that occurred.  An increase to flood releases in the later stages of the Event (prior to the morning of Tuesday 11 January 2011) had the potential to increase urban damage, due to the possible southward movement of the prevailing weather system.  Had the rainfall on Tuesday 11 January 2011 largely fallen in catchments downstream of the Dam, the transition to an operating strategy to protect the safety of the Dam may have been avoided, however urban damage would have likely increased under this scenario, due to a loss of the mitigation effects that were provided by the Dam.

Given the current level of forecasting technology available, there was an extremely high degree of difficulty in predicting the actual quantity, intensity and spatial distribution of the Event rainfall.  This resulted in a high level of uncertainty in predicting the likely Dam inflows in advance of rainfall on the ground and this can be demonstrated by reviewing the one-day, three-day and five-day quantitative rainfall forecasts provided by the BoM during the Event.

The available recorded data shows the January 2011 Flood Event was unprecedented in the history of Somerset and Wivenhoe Dams and rivals the largest floods in the recorded flood history of the region. However, the successful operation of the Dams as flood mitigation storages is considered to have had a major effect on reducing flood damage in the areas downstream of the Dams.

• Without the mitigating effects of Wivenhoe Dam, the peak flood height measured at the Port Office gauge near the Brisbane CBD would have been approximately 2.0m higher than was experienced.

• Based on the current damage curves, these projected reductions in the flood peak height equate to significant reductions in the potential for the loss of life as well as monetary savings in regard to property damages in the order of up to $5 billion (Source: Flood Damage Tables - River PMF tab; provided to Seqwater by Brisbane City Council).

• Without the above flow rate reductions provided by Wivenhoe Dam, it is estimated up to 14,000 more properties would have been impacted by the January 2011 Flood Event (Source: Flood Damage Tables – River PMF tab; provided to Seqwater by Brisbane City Council).

Conclusions The significant conclusions drawn from the information contained in this Report include:

• The data collection and flood modelling systems used to support decisions made during the Event performed well and assisted informed decision-making, in accordance with the Manual.

• BoM rainfall forecasts did not support the additional release of flood water early in the Event.

• During the Event, Seqwater followed the Department of Environment and Resource Management’s draft Communications Protocol, which was compiled after the October 2010 flood event.  This Protocol was
developed to ensure effective communication between local, State and Commonwealth agencies impacted by the release of flood water from the Dams.

• The January 2011 Flood Event was a very large and rare flood event.  The combined effects of Somerset Dam and Wivenhoe Dam did reduce flood damage downstream, however it was not possible to fully mitigate the impacts of the Event without putting the safety of the Dams at risk.

• Studies associated with the design and operation of Wivenhoe Dam dating back to 1971 indicate a flood of the magnitude of the January 2011 Flood Event would be expected to result in urban damage below Moggill.