The value of hindsight, or how to say "I told you so" without ever having done so

On the 9th of March, 2010, the opposition (Liberal National Party) called for a reduction of the flood mitigation capacity of Wivenhoe dam to enhance Brisbane's water supply.  Not content with a review of options, Mr Seeney (LNP Shadow Minister for Natural Resources) demanded that extra water be retained until the completion of any review.  "It would be absurd", he said, "to release water from Wivenhoe until all options are thoroughly investigated."   The LNP renewed its calls after Wivenhoe dissipated a flood event in early October of 2010.   Then Lawrence Springborg renewed the call on December 20th, in the middle of yet another flood event, from which Wivenhoe again protected Brisbane.

These calls represented the ideal time for anyone to argue for enhanced flood mitigation at Wivenhoe.  Those such as Andrew Dragun, who now believes that water should have been released to prevent the risk of flooding, said nothing.  He thought it was far more important to attack the Federal Governments Murray Darling Basin Scheme.  Hedley Thomas, who has run so hard on this story for the Australian, ignored the story.  And Michael O'Brien, the engineer who has so publicly condemned the dam operators was not to be heard. Their wisdom, it appears, is exclusively 20-20 hindsight.

Let's put this in context.


Late on Sunday the 9th, the engineers at Wivenhoe dam had no reason to suspect what was coming.  They had already passed through three flood events (13th October, 21st December, and 29th December) without difficulty.  Having lowered the dam levels to near 100% of the Full Supply Level (67 meters) after the last flood event, waters were on the rise again.  They had increased flows over the spillway to a level that flooded all bar two of the cross river crossings above the Centenary Bridge to compensate, but had no reason to suspect what was coming.  The weather forecast was for heavy rain, but they were experiencing heavy rain, and had not reason to suspect heavier. 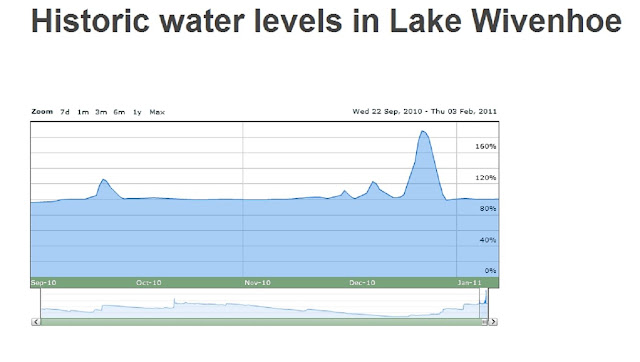 The charge against them is that during this period they should have released more water.  They should have flooded all the lower middle river crossings (between Wivenhoe and Jindalee) and low lying areas of Brisbane in anticipation of what was to come.  How realistic is that? 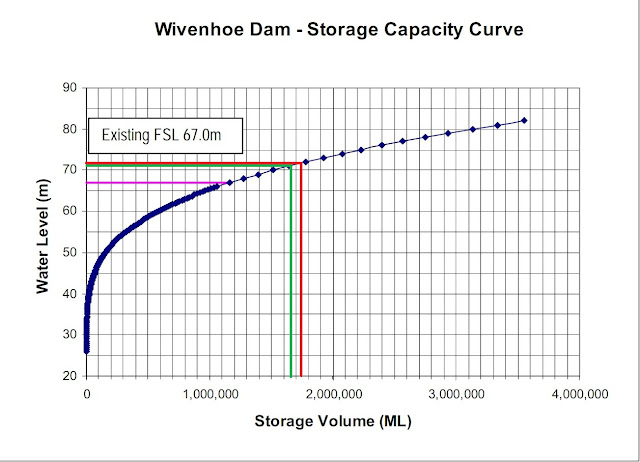 (Wivenhoe Dam storage by level, purple line is the Full Supply Level, Green line is 71 meters, while the Red line represents dam levels  as at 9:00 am Monday 10th of January, 2011.)

That is interesting because SEQ Water's report on different methods to increase Wivenhoe's storage capacity considers the effects of increasing the supply level to 71 meters with no other adjustments. 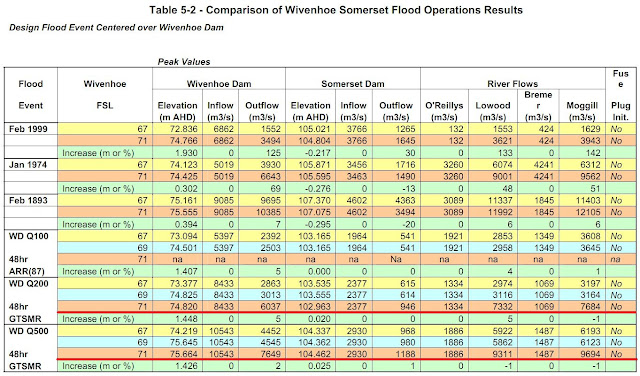 Very clearly the events at Wivehoe lie somewhere between these two.  They were significantly worse than a 1 in 200 year event, but not quite as bad as a 1 in 500 year event.

So when push comes to shove, what the engineers at Wivenhoe "did wrong" is that on the weekend preceding the flood, they did not anticipate an unpredicted 1 in 200 year (at minimum) event.

I am certainly open to suggestions that the operating manual needs to be reviewed in light of experience.  With hindsight, it may have been better to allow the fist fuse plug to be overtopped and keep peak dishcharge below 6,000 cumecs.  Or not.  That is something only a full review can tell.

But suggestions that the engineers did the wrong thing, given what they knew are simply false.  They are needless vilification of people who under trying circumstances saved Brisbane from a much larger disaster.

And what of the suggestions that Wivenhoe's dam level should be reduced before hand in anticipation of the flood?  Had that advice been carried out during the last significant La Nina, Brisbane's water supply would have dropped to  5% of capacity in the recent drought.  Had it been followed the last time the dam was full, it would have run dry a year before the end of the recent drought.  I doubt Andrew Dagun or The Australian will indemnify the people of Brisbane against the risk of a similarly long drought following this La Nina.

(Graph recovered from Ryan Independant,  Ryan being one of the federal electorates in Brisbane.)
Posted by Tom Curtis at 11:32 AM