Recent retreats in ice in the Alps due to global warming have resulted in a number of interesting archological finds, of which the most famous is the "ice man", Otzi.  Less famous are the finds in Schnidjoch Pass.  These have been purported by AGW deniers to prove that the Alps were warmer in the past when the artifacts found in Schnidejoch were dropped by their former owners.  In fact, the logic is exactly the reverse - these artifacts prove Schnidejoch to have been colder throughout the last 6000 years than it has been in the early twenty-first century.  Here is a detailed explanation of why, from a recent comment at SkS.  A follow on comment, not posted here, is also of interest.

sotoloth7 @10, you are refering to the finding of ancient artifacts in the schnidejoch pass between Italy and Switzerland.  The story is that in recent times the pass has been so icebound that it was even forgotten that it was a potential route across the alps.  The finding of neolithic, bronze age and iron age artifacts, however, prove that the pass was used in ancient times, which is supposed to prove the region was warmer in those times.
Cutting through the denier dross, the key facts are:
1)  Artifacts have been found in the pass, mostly of organic material (bark, wood, plant fibres, leather);
2)  The artifacts are found when the current ice which holds them melts, thus revealing them;
3)  Once uncovered by the ice, organic artifacts decompose rapidly.  Hafner (2011) states:


"Organic finds have only a limited chance of being preserved once they are no longer encased in ice and become exposed to the elements. Once objects are free of the ice, they remain covered by snow for almost nine months of the year; for the remaining months, however, they are exposed to frequent rain and snowfall alternating with intense sunlight and strong winds. Artifacts lying on the surface are blown away by the wind or exposed to UV radiation, which makes them brittle. Compared to the lowlands, there are probably fewer active decomposers at 2700 m asl and at such low temperatures.  Nevertheless, unprotected fragile artifacts such as leather or textiles would likely not have survived more than a few years. Timber fragments lying exposed on the surface of the scree would probably have survived considerably longer, perhaps for 50 to 100 years."
(My emphasis)

4)  Some organic artifacts found in the pass are very ancient.  Hafner itemizes the most ancient artifacts:


"The oldest objects from the Schnidejoch include a fragment of a bowl made of elm wood (Fig. 6) and several fragments of arrows. Five pieces of leather and wood dating from around 800 to 1000 years later can be attributed to the second Neolithic time slot from 3700 to 2900 BC.
The third Neolithic time slot, between 2900 and 2200 BC, yielded particularly numerous and spectacular finds. An almost complete bow kit was found over the course of a few years in many pieces that were likely from one kit. The bow kit consisted of a complete bow, 1.6 m long, made of yew wood (Fig. 7); a bow string made of an unidentified material, probably of animal origin; a bow case made of birch bark (Fig. 8); numerous complete arrow shafts, as well as many fragmented ones (Fig. 9); and two arrowheads. This Neolithic equipment was supplemented by a leather legging (Fig. 10). This item of clothing exhibited obvious seams stitched with plant fibers and repairs in the form of patches. This large piece of leather measuring 89 cm × 60 cm—probably one of the largest preserved prehistoric leather fragments ever found—was analyzed using various  methods." 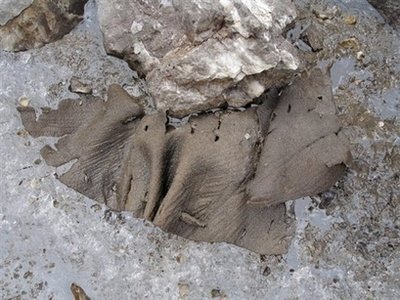 5)  The artifacts were found within a short distance of the summit of the pass.    As seen in the picture below, the summit of the pass (rather than the mountain) is marked by a small rige of stone, with the artifacts being found around the small ice patches immediately below that ridge, mostly on the northern side.  Because they were found so close to the summit, they are unlikely to have been moved by ice while burried, and were almost certainly deposited within meters of the locations in which they were found. 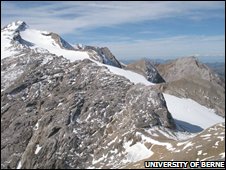 Bringing together these six points, it becomes evident that the pass is currently largely ice free in summer.  Further, it has not been largely ice free for more than about 100 years since 4300 BC (6300 years ago).  If it had been, the earliest (wooden) finds would have decomposed and not been found.  Further, it has not been largely ice free for more than a few years since 2900 BC (4900 years ago).  If it had been, the five pieces of leather from the second period would also have decomposed.  Therefore, taken together the finds are strong evidence that prior to the first discovery of artifacts in 2003, the summit of the pass had been largely ice free for at most a decade in the preceding 5000 years.  Put in other words, since that first discovery in 2004, near ice free summers at the summit of schnidejoch pass have equalled or exceeded the number of such near ice free summers in the preceding 5000 years.
Deniers take this stunning fact and turn it into (apparent) evidence that the pass was warmer in the past.
Obviously they are playing a pea and thimble trick.  In this case the trick is the assumption that the pass must be ice free to be traversed.  The assumption is not true, with passes traversible with shallow snow - even knee deep snow - without undue difficulty.  In contrast, the pass does need to be almost completely ice free to reveal artifacts dropped into the snow in previous millenia.  In fact, because the pass can be crossed even with snow present, and because even short periods of ice free summers would have caused the decomposition of the remains, the presence of organic remains is strong evidence the pass has not been nearly ice free in the 5000 (and probably 6000) years preceding 2004.  The object of the pea and thimble trick is to make evidence of the unusual warmth of the early 21st century look like evidence that it was not unusually warm at all.
Posted by Tom Curtis at 4:20 AM