Just over a year ago, I drew attention to Murry Salby's efforts to suggest that CO2 was not a major contributor to ongoing warming in the twentieth century by the simple expedient of changing the scale ratio between two graphs that compared CO2 concentrations and temperature.  By greatly reducing the number of parts per million of CO2 in the scale relative to the degrees centigrade when comparing observations, Salby drastically increases the apparent slope of the CO2 observations relative to the temperature observations, thereby artificially creating an appearance of disparity where none exists.

I recently noticed the same two charts were used by Salby in his lecture at Hamburg.  Not only were the same two charts used, but much of the discussion was the same.  First he draws attention to the close match between CO2 concentrations and temperatures in model projections of the twenty first century, telling us that: 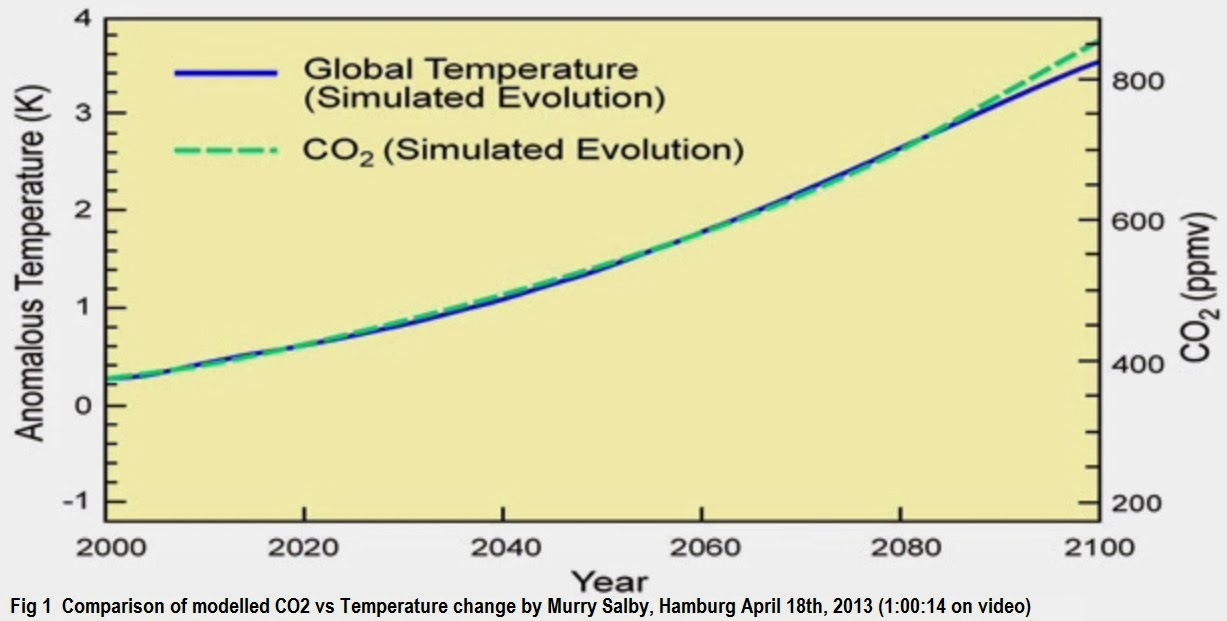 As in Sydney, having overstated the close relationship between temperature increases and CO2 increases in the model world, Salby goes to great lengths to draw attention to the disparity between the observed rise in CO2 and that in temperature - a disparity almost entirely created by his manipulation of scale ratios.  He says (1:02:00):


"In blue is the observed record of global temperature from the satellite MSU.  In green the observed record of CO2.  The long term evolution of temperature parallels that of CO2 during the 1980s.  It's been scaled to match the trend then, as was obtained by models of the IPCC.  With account of the eruption of Mount Pinatubo in 1992, their correspondence is similar during the 1990s.  But after the El Nino of 1997, CO2 continued to increase.  Global temperature did not.  Their divergence over the last decade and a half is now unequivocal."

As can be seen by comparing with the transcript of his Sydney Institute lecture from a year ago (in my article linked above), that is almost word for word.  The only significant difference lies in the addition of the sentence which I have bolded; a sentence which purports to explain the choice of scale ratio.  That sentence is rather ambiguous.  It is not clear what Salby mean by it, and he nowhere specifies the method whereby he "scaled to match the trend".  More importantly, there is no interpretation of that sentence in which it is both relevant and true. 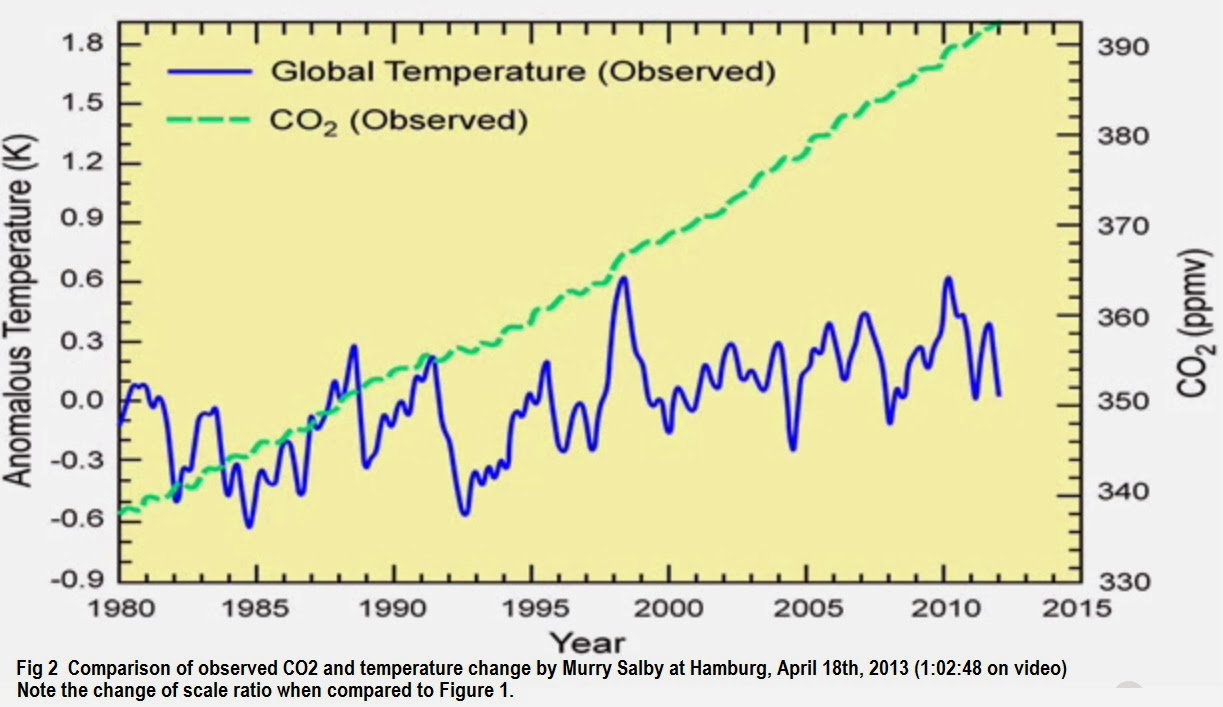 On the most straightforward interpretation, Salby claims that the temperature has been scaled so that the 1980-1989 temperature trend matches a trend from IPCC models.  But which trend?  It cannot be a modeled temperature trend, for that would require scaling temperature against temperature when there is only one temperature scale on the graph, ie, an impossibility.  What are the alternatives?

Interestingly, for Salby's scale ratio to match IPCC predictions, the IPCC would need to have predicted a TCR of 11 C per doubling of CO2.  That figure is far outside the range of IPCC predictions, even for Equilibrium Climate Sensitivity.

As a third alternative, it may be a claim that the scale ratio has been set so that the slope of CO2 concentrations matches visually IPCC predicted temperature increases of 0.2 C per decade (AR4) or 0.23 C per decade (AR5).  Given the 57.04 ppmv increase in CO2 concentration from 1979 to 2012, that represents an average increase of 16.8 ppmv per decade.  That produces scale ratios of 1.2 C per 100 ppmv (AR4) or 1.37 C per 100 ppmv.  Even the later case is just 30% of the scale factor used by Salby, and it is anachronistic in that Salby did not have access to AR5 data when he made the chart (in 2012).

All three of these interpretations are reasonable, and represent reasonable methods for determining the scale factor between temperature and CO2 concentration when comparing changes in CO2 concentration to temperature increases to test their plausibility.  None of them, however, is what Salby did.  Rather, Salby has inflated the scale factor, thereby exaggerating the discrepancy between temperatures in CO2 increase by a factor of more than three.

Indeed, as he already had a scale factor for the comparison from his first graph, ie, Salby's Ratio (0.69 C per 100 ppmv) he had no justification in using any other.  Although the others are all reasonable choices, because he was comparing the difference between the two graphs, between models and observations, the only appropriate way to do so was to use the same scale ratio on both graphs: 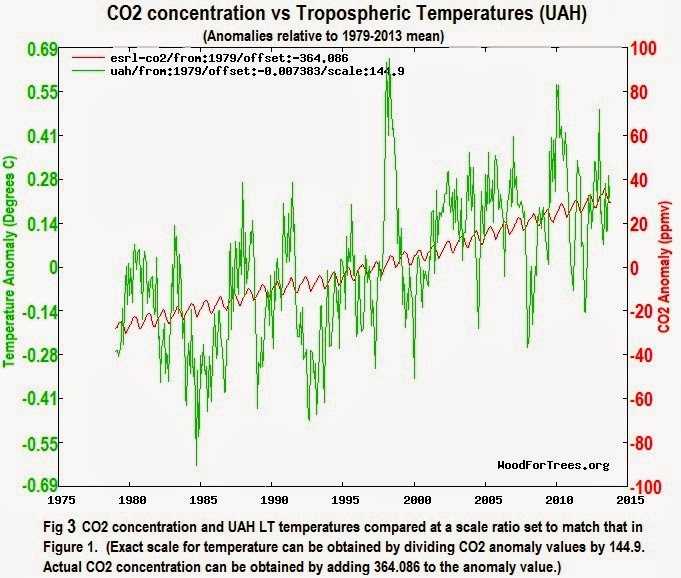 So, in the end, even if Salby's claim about how he had set the scale ratio was true, it would not justify the choice of a different ratio.  However, his claim is not true (if relevant).  He appears merely to have added another misleading statement to conceal his original misleading approach.