The human-caused origin (anthropogenic) of the measured increase in atmospheric concentrations of CO2 is a cornerstone of predictions of future temperature rises.  As such, it has come under frequent attack by people who challenge the science of global warming.  One thing noteworthy about those attacks is that the full range of evidence supporting the anthropogenic nature of the CO2 increase seems to slip from sight.  So what is the full range of supporting evidence?  There are ten main lines of evidence to be considered:

1) The start of the event

The increase in CO2 concentration over the long term (1850-2005) almost exactly correlates (corr.: 0.997; R^2: 0.993) with cumulative anthropogenic emissions from all sources including Land Use Change (LUC).  The close correlation has continued in recent times, with a correlation of 0.9995 when compared to the Mauna Loa record (r^2: 0.999).  So exact a correlation would be extraordinary if anthropogenic emissions were not the cause of the increase in CO2 concentration. Carbon 14 is formed in the atmosphere by collisions between cosmic rays and Nitrogen.  It has a very short half life (5,730 years), but atmospheric C14 is continuously replenished, maintaining a near constant concentration.  Buried C14 is not replenished, however.  As a result, whether from volcanoes or fossil fuels, CO2 from long-buried sources has effectively no C14.  The addition of large quantities of CO2 from a long-buried source to the atmosphere will result in a significant decline in C14 concentration in the atmosphere, which is what we see.  More recent, high precision measurements show the decline in C14 continued after the end of atmospheric nuclear testing.This is strong evidence that the source of the increased concentration of CO2 is fossil carbon, either from volcanoes or from fossil fuels. Carbon has two stable varieties (isotopes), C12 an C13.  Because C13 has an extra neutron, it is heavier.  In photosynthesis, most plants find it easier to take up the lighter C12, and do so at a higher rate than they take up C13, with the result that carbon compounds formed from the products of photosynthesis, including plants, animals and fossil fuels have a lower C13 to C12 ratio than does the atmosphere.  Introducing a large quantity of CO2 derived from photosynthesis would cause the  C13/C12 ratio to decline.  In contrast, CO2 introduced from volcanoes or from outgassing from the ocean would not significantly affect the C13/C12 ratio.  In fact the global C13/C12 ratio has declined, which is very strong evidence the source of the CO2 increase has was C12 enriched, ie, derived from photosynthesis.  Therefore it is very strong evidence that it comes from the biosphere or fossil fuels, rather than from volcanoes or oceanic outgassing. Because the change in solubility of O2 in water with change in temperature significantly differs from that of CO2, the change in O2 concentration is not affected by other possible CO2 sinks. That means the decline in CO2 concentration means any large unknown natural sources of CO2 must not come from a source of combustion but must come from a low C14 source generated by photosynthesis. These facts together almost completely preclude the existence of such putative natural sources. Because of the importance of the O2 decline, it is worthwhile looking at the chart below from the IPCC TAR which shows it:

The observed decline in O2 is straightforward. The diagonal arrow from the start point marked "fossil fuel burning" represents the expected change in CO2 and O2 concentrations from known fossil fuel consumption. The arrow marked "ocean uptake" represents the uptake of CO2 by the ocean, which does not affect the O2 level. The arrow marked "land uptake" is the uptake of CO2 and release of O2 by photosynthesis, which also decreases the CO2 concentration and increases the O2 concentration. Finally, the small arrow marked "outgassing" represents outgassing of O2 from the ocean, which does not affect CO2 concentration. That outgassing is partly the result of a warming ocean, and partly a result of the very slight decrease in the partial pressure of oxygen in the atmosphere. These factors are reasonably, but not exactly known. It is important to note that because the fall in O2 concentration is significantly less than that predicted from known combustion of fossil fuels, the uptake of CO2 by photosynthesis must exceed the combustion or decay of modern organic material from either anthropogenic (Land Use Changes) or natural sources.

7) Increasing CO2 concentrations in the ocean 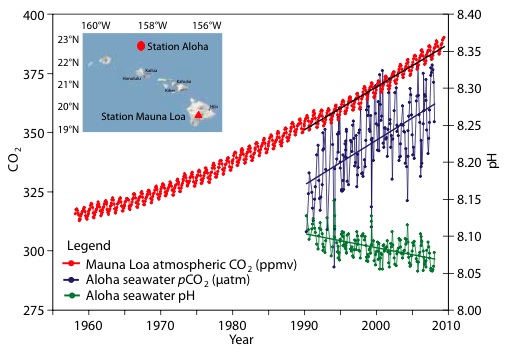 Anthropogenic Emissions from Land Use change and deforestation represent 10% of all human emissions (0.9 PgC of 10 PgC). Over the last century, human-caused deforestation and other land use changes have been by far the largest cause of change in land cover, and hence natural changes cannot be significantly larger than that.(Source)  Indeed, as discussed regarding the declining oxygen concentration, that decline together with the land uptake shows that the biosphere is a net sink for CO2.

10) Past changes in CO2 concentration As a child I enjoyed playing Cluedo (Clue in the US market).  I soon learned you discovered more from the questions people did not respond to than from those that they did, and developed a matrix from which to plot responses and non-responses.  Filling in the matrix soon honed in on the correct answer, who killed whom, with what and where.  Science is sometimes like that.  The lines of evidence are the questions we put, and if we plot out our matrix, it quickly becomes clear that it is the humans who have caused the rise in CO2 levels, by burning fossil fuels in the twentieth century.  Every other hypothesis makes a host of predictions that do not pass the test of the evidence.