Skeptical Science and the Lewandowsky Survey

Note:  This post was intended as a footnote for a later, longer post dealing with the Lewandowsky survey of 2010.  That has been much delayed, so I am publishing this now to clear it out of the way.

Some controversy has erupted over the claim that notice of Lewandowsky's survey on attitudes to climate change, the free market and a variety of conspiracy theories was posted on Skeptical Science.  As it stands, no internet accessible evidence dating from that time exists of such a post, although a tweet by John Cook notifying people of the survey on the 27th of August still exists.

Despite the lack of internet evidence, John Cook has claimed that a post was made on Skeptical Science in 2010.  His memory of the event is vague.  He initially was confused as to the year of posting, initially remembering it as 2011 rather than the correct 2010.  Further, he infers rather than remembers that the post was removed after the data was collected.  His memory that the survey was posted has been verified by Lewandowsky who has said,

Unfortunately the recollection of both Cook and Lewandowsky is faulty.  Following the method used by McIntyre I have examined the Way Back Machine record.  Rather than examining the home page as he does, however, I examined the much longer list of recent articles to be found in the "Latest Posts" in the sidebar.  Doing so for three dates (Aug 30th, 2010; Sept 8th, 2010; and Sept 23rd, 2010) provides a continuous overlapping record of Skeptical Science posts from Aug 17th to Sept 23rd that can be compared with the Skeptical Science Archive.  During that period, all articles listed on the Way Back Machine are still listed in the Skeptical Science Archives.

Given this evidence, I must conclude, as did McIntyre that,

It seems very probably, however, that Cook and Lewandowsky are misstakingly remembering the Tweet as notification on the blog itself. 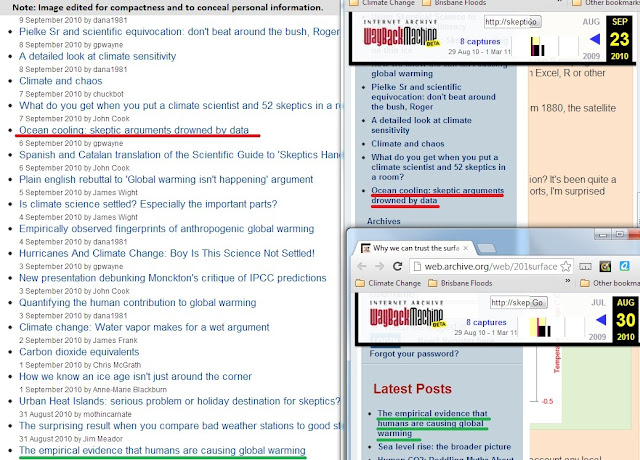 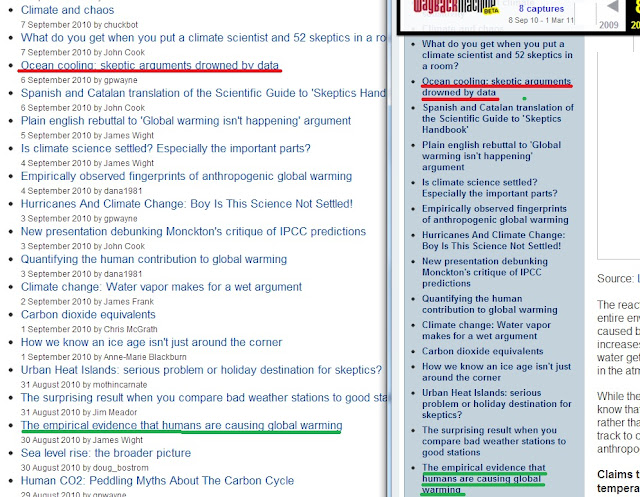 As a footnote, it is my understanding that some people are intending to make a complaint of academic misconduct with respect to this incident.  An error in a published paper is only academic misconduct if it was intentional.  There is no evidence that this was an intentional error.  Rather, it was a case of misunderstanding and faulty memory.  It may be worthwhile inquiring of the Journal as to whether, in their view, the error is of sufficient import as to require a corrigendum.  The Journal's view on the matter, however, should be final.
Posted by Tom Curtis at 11:08 AM